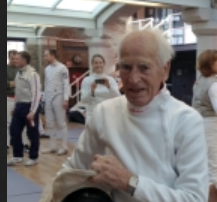 Dennis died on 7th March. He was 94 and was the BVF’s oldest member. In 2011 at the age of 92 he entered and fenced in the BVF Championships at all 3 weapons. He joined us for the formal dinner on Saturday evening and was on the piste early next morning. He had driven from Tavistock to the event in Gloucester and was not at all concerned about the drive back. A remarkable man.

He was still actively fencing in recent months.

Dennis who I believe had been fencing for 67 years was an inspiration to us all. Anyone who had the pleasure of leafing through his extensive scrapbook soon realised what a real fencing enthusiast he was.

I have known Dennis for so many years, and he epitomised the heart and soul of club fencing. Over the many years I have been involved with fencing, Dennis supported Plymouth and all his fencers. We shall miss him. I am so glad he had an honour from BF in the recent years.