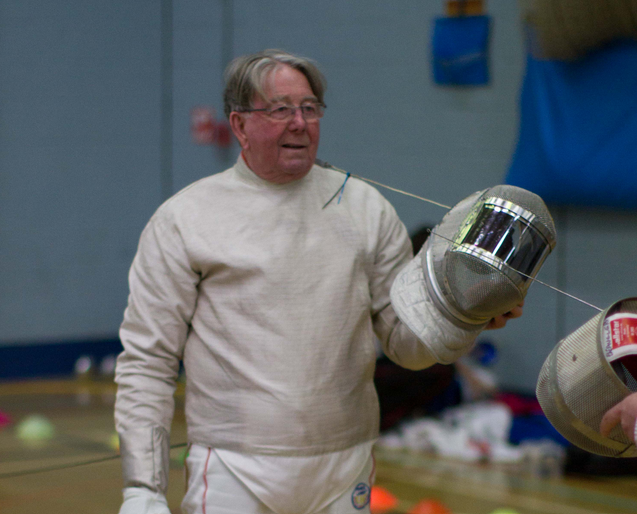 Dennis Ward had a fencing career for about 70 years. It started when he took up the sport following his decision to join the Royal Navy. Then following his return to civilian life continued with the sport, then subsequently joined Espada Fencing Club in Bournemouth. Where he was a member for over 4 decades. He took an active part not only in fencing all three weapons, but in helping to manage the club. For many years he looked after the financial side of the club.

He also planned the movement of kit in storage and the construction of new storage facilities when the club moved from one venue to another. He was also active and held office within the Hampshire Fencing Union and Southern region. He was a regular in competitions and I recall over many years going to London and other competitions around the UK with fellow fencer John Payne competing as individuals and as a three man Epee team.

He became a regular fencer with the Vets again fencing around the UK and in Europe where he achieved success gaining European Bronze medals usually with Sabre. He qualified as a referee and was a regular official at junior competitions where he could be found refereeing matches of all three weapons. He presented a trophy to the club for our junior Epeeists to compete for and took great pleasure in presenting this to the winner. He was awarded the Bronze medal by British Fencing for his services to the sport. He retired from Espada about 5 years ago due to his ill health.

Thank you Dennis for your support, motivation and memories.

This is how I remember Dennis Ward.

He seemed to have boundless energy, always had a smile on his face and loved his fencing and being around fencing people.

He clearly enjoyed life and wanted to get the most out of it.

I had noticed he had been missing for a while. Easy to notice as he had fenced all three weapons.

So sad to hear he is no longer with us.

My love and best wishes to his family.

That is sad news. I have fond memories of Dennis coming to referee each year the Public Schools’ Fencing Championships. He was simply indefatigable, charming, helpful and good fun.

Condolences to all his family,

Dennis was a member of NVA/BVF since 1989 and was a regular at vets events usually fencing all 3 weapons.

I shall miss his welcoming smile and good humour.

I’m saddened by the news of Dennis passing. He always came over and spoke to me regarding my father and uncles who fenced at the Wigston Magna and Leicester city fencing clubs.

He competed often with them and had some great story’s of their time together.

My thoughts and condolences to his family.

Dennis fenced in many veterans competitions in all three weapons and his cheery disposition and good nature always raised a smile.

Everyone at BVF sends their heartfelt condolences to Dennis’s family.

Such a lovely man – always a smile and twinkle in his eye. A classical sabreur.

Very sorry to hear the news this week.

I was fortunate to start my fencing journey at Espada back in 1984. Dennis was the heart of the club and a really lovely man. Although I moved away for university I was lucky enough to go back to the club for a couple of years in the late 90’s and Dennis was just the same and remained a very good fencer.

I am sure everyone at the club, and those who knew him, will miss him dearly.

I enjoyed competing so many times over the years with him – great sportsman and gentleman – always a ready smile and a joke.

He will be missed.

Sad news about Dennis. We spent many years battling for the 70+ medals – all with great good humour.

Please include me in in any condolences to his family.

I was very sad to hear Dennis had passed away. He was such a lovely, happy person – a real gentleman. He was so kind and helpful when I started going abroad with the Veterans and we always had a chat when we met at competitions.

My condolences to Dennis’s family.

I was sad to hear that Dennis had passed away. I fenced him many times at Espada and have fond memories of those times.

The last photos I took were 2014, possibly at a Hampshire competition & one presiding at the Southern Region BYC qualifiers.