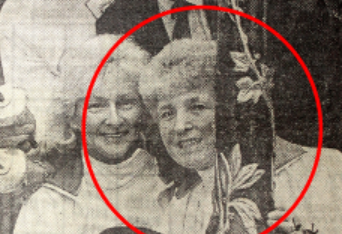 It is with regret I announce the death of Dawne Bird. She was diagnosed with leukaemia in 2012. She went into remission but in March this year it returned.

Dawne had always wanted to do fencing as a youngster, but couldn’t afford it through bringing up a family, and also her job as a dance teacher limited her time. Through her work as a dance teacher she was invited to a Garden Party at Buckingham Palace.

After learning about the Vets, she was one of the first, at the the age of 60. Encouraged by her husband Bob, she joined Woodhouse Eaves Fencing Club, run by myself. She had individual lessons at her dance studio and to have a rest she would tell some jokes, then start her lesson again, then tell more jokes.

Dawne helped out at the Leon Paul Junior series in order to raise funds for the Vets. She was the after dinner entertainer, getting together her crew of Pressy, Maureen Hillier and Sue Church for a song and dance at Beaumanor Hall.

Bob encouraged her to join ‘Henry’s Army’ and she travelled around. In Corsica her daughter joined her from Cyprus. She won several medals and certificates: a Bronze in the 70+ at the Europeans in Hungary, a Gold in the Plate at the Wenlock Games beating people who were fifty years younger than herself.

Even though her illness stopped her fencing, she still went to Woodhouse Eaves to help out. She enjoyed giving of herself a ready smile, a joke, and typically has donated her body to Science. There will be a memorial service at a later date.

So sorry to hear this – such a lovely lady!

I particularly remember the tap dancing divertissement which she choreographed for one of the Christmas Dinners at Beaumanor!

Dawne was a lovely lady, the first friend I met in the early days of Henry’s army on our long treks to Emden in the old minibus, no sat navs then we got lost every time.

I remember our lovely Christmas dinners at Beaumanor Hall where Dawne myself and little Mo (Maureen Hillier) did a cabaret, choreographed by Dawne with her wonderful knowledge of dance, we tap danced to ‘When I’m 64’.

I remember Dawne from the odd competition on the Open circuit many, many years ago before I became a Veteran.

My condolences to all her friends and family.

Dawne joined the NVA in 1990 and was one of the stalwarts of the Beaumanor Hall era.

Being a local lady she helped with preparing meals and the entertainment at National Championships and at Christmas dinners as well as turning out to fence.

She was a gentle lady but boy! was she fit. Her dance classes kept her in shape.

She played her part in forming the character and spirit of the early Vets and we will miss her.

Dawne always had a cheerful and happy smile and was full of energy, and was overflowing with great enthusiasm for her dancing school and also her love of fencing.

She was one of the original NVA members, and happily cooked breakfast for the fencers staying in the huts at Beaumanor Hall. On many occasions she helped with making refreshments at various competitions to raise funds to establish Henry’s newly formed Veterans Fencing, and was a great asset.

I will always remember our jolly times together.