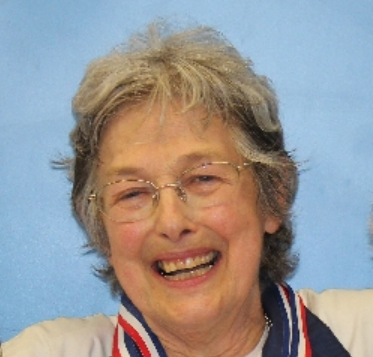 She joined the NVA in 1997 and immediately earned the respect of her veteran fencing colleagues through her warmth and generous attitude towards everyone who met her.

Carol was a 3 weapon fencer and always entered all 3 weapons in the National Championships and was remarkably consistent in displaying her considerable fencing ability.

From 2001 to 2011 she won her age category medal in Women’s Sabre every year at the British Veterans Championships and missed just one medal in 2008 when she retired injured.

From 2003 to 2011, she competed in the European Veterans Individual Championships, a competition held every 2 years, and in 2007 she won the Silver Medal. In every other event, she won the Gold Medal which was a truly remarkable achievement.

During this time, she also won 2 Bronze medals at Epee in 2009 and 2011 and won the Women’s Sabre Gold Medal in the 2011 Veterans World Championships.

Before she retired, Carol was an ENT surgeon at a time when there were considerable barriers to women in the profession. Carol leaves a son, David, Daughter in Law Helen and a grandson who she always affectionately called “sprogget”

Carol was a true Ambassador for Great Britain’s veteran fencing and she has certainly left a legacy of achievement as an example for all veterans to follow and she will be sadly missed by us all.

Carol was in great spirits on Friday when I got to the hotel, she was already there with her Welsh crew. She immediately started to tell me news of people who were ill in the Vets, to be sure I knew. She looked great, still on her cocktail of drugs but full of smiles and life.

Saturday morning was sabre. She fenced with her usual passion. She was my hardest fight! 5:3 ! Saturday afternoon was foil. I didn’t see her collapse. I don’t even know if she had started to fence but she was plugged in on the piste. Someone shouted…..its Carol! and she was a heap on the floor. The ambulance was called immediately as she was not responding and everyone did whatever we could but I think she had gone .

She did not suffer, she didn’t appear in pain or even ill. What a way to go. Surrounded by friends, doing what she loved to do. If she had recovered she may never have been the same again but we will remember her as a vibrant, passionate Vet with a big heart who will leave a lasting memory for so many.

The decision was made to abandon fencing for the rest of the day but we believed it would have been her wishes to carry on and enjoy the weekend whatever. The Galician organisers were so upset but were persuaded that nothing should be changed and the evening party would go ahead. They did us proud. They were fabulous hosts and I believe the whole experience of sharing the tragedy brought us all so close.

The following day we arrived at the venue and the Welsh flag and flowers were laid out on the piste which we all found quite hard to look at at first. No one fenced on the piste and the competition carried on around it. There was a minute’s silence before the epée finals, probably not good timing as the tears made Nina the Galician in the final full of tears. But I think it added a passion to her fencing, so maybe the timing wasn’t so bad after all.

Gillian Aghajan did a lot and Pat Shepherd-Foster in looking after Mike Norfolk who was extremely upset, as was everybody. Vivien Frith fenced Carol’s fights to finish the competition properly. That was a tough one! Michele Narey was fabulous. She accompanied Mike to the court and was so practical with dealing with the Spanish authorities and in liaising with David Wengraf and his mother-in-law who had waded in and proved so useful. The Spanish authorities needed so much information. Michele was bowled over by the efficiency of the Spanish authorities and all the people they had to deal with. She thought it would never have been as efficient in the UK. Luckily Carol had travel insurance.

I can’t believe there has been an autopsy and she has already been cremated at David’s request. Pat and Mike brought her ashes back on the plane with them. They were meeting David at the airport.

I don’t know if there will be a memorial service for her but I believe there will be many in the Vets who will need this to say good bye. She touched so many hearts and gave strength to so many who were going through difficult times in either their own health or relationships. She had the ability to do this.

What more can I say. Everyone will feel the loss now as we are quietly in our own homes reflecting on the weekend, and when the next Vets event takes place there will be a missing person and it will hit us all.

I am so sorry to hear of Carol’s death and then read more in the Vet’s newsletter. What a terrible shock for everybody but how beautifully they managed the situation in Galicia.

I met Carol only once, last year at the European Championships, but it was clear what a formidable person she was. Her fencing achievement was amazing, so I suppose dying on the piste while doing what she enjoyed most was a splendid way to go.

If you can pass on this with my condolences to her family I would appreciate it.

Kristin Payne (in the Netherlands)

It is difficult to describe in words the events and emotions of the weekend in Galicia. Carol collapsed on the piste during the women’s foil event on Saturday afternoon already having fenced sabre earlier in the day and had commented on how she much was enjoying the foil. She was winning fights and had said to me that she was both thinking and fencing like a foilist.

She collapsed suddenly and did not regain consciousness nor respond but we carried out CPR until the ambulance arrived and the medics pronounced her dead. We tried to save her and after a short time knew we couldn’t but did not give up until we were told to stop.

I cannot express how grateful of all us who were there are, especially the Welsh Vets team, to our Galician friends for the kindness, love and respect they showed us, and to Carol in her death; and the Spanish authorities too were wonderful. The gestures our Galician friends made were so thoughtful and respectful. They laid out the Welsh flag on the piste where Carol had died after her body had been taken away and lowered all the flags on the wall.

Carol had always said that if she died during a competition that we were not to stop the rest of the event and we all agreed to continue the next day and to still hold the gala dinner that evening in her honour. It was a good evening and it was dedicated to her.

When we arrived back at the sports hall on Sunday there were flowers on the flag. One of the Galician fencers was wearing a black armband. We all agreed that Vivienne Frith of Scotland would fence for Carol as honorary Welsh and she fenced brilliantly in the epee team to put Cornwall into bronze position giving us the silver. Carol would have been so proud and I am sure she would have chuckled to see Viv’s new found epee skills. Viv accepted Carol’s team bronze medals for sabre and foil, which are now with Carol’s family, and the WVFA team were honoured to ask her to keep the epee silver medal which we are sure that Carol would have wanted her to do.

Before the finals every single person joined together and spontaneously formed a large circle linking arms around shoulders for a minute’s silence and whilst we bowed our heads the Welsh National anthem was quietly played. This was such an unexpected and poignant gesture that I was not the only one who sobbed. During the medal presentations one of the Galician fencers wore a Welsh tracksuit top in Carol’s honour.

Despite the sadness of everything I must say it was so heart warming to feel the love and empathy, and Carol would have been honoured and proud. I am sure she was smiling down at us.

To our Galician friends – muchos gracias and besos :-). We will never forget.

Carol’s body was cremated in Santiago de Compostela and her ashes brought back to the UK by her Welsh team mates who had travelled with her from Manchester to Spain.

There have been many tributes to her on Facebook and the Fencing Forum.

It is hard to see a friend die and Carol was a good friend to me from the moment I joined the Welsh Vets when we laughed at our ‘Welsh’ surnames and to me was ‘Auntie Carol’. We shared some very happy times and sad times too and she was always there for me.

I was so shocked when I was told about Carol; she has been fencing sabre so much longer than me, and it felt like she would always be there.

Please pass on my MOST sincere condolences to her family.

So sorry to hear this. My sincere condolences to her family.

Please convey my deepest sympathy and condolences to Carol’s family.

….Wow….what a shock….I am utterly lost for words except to say she was a lovely, lovely lady, a good fencer and a great credit to the Vets.

What an elegant, intelligent and witty woman! Carol was always good company, someone I would seek out to chat to at Veterans events. She never dwelt on her aches and pains, there was always something much more interesting to talk about.

I remember her breaking her Achilles tendon on the piste in 2008 and thinking that she would never fence again. Yet she was back on the piste a year later fencing as well as ever and won her age category again.

She epitomised the spirit of the Vets and we will miss her.