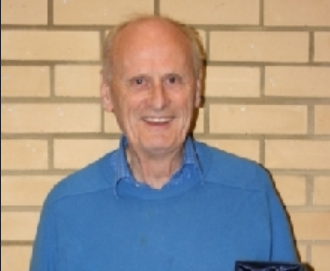 Bob Turner, who died following a serious illness on 19 February 2013, had a long and distinguished fencing career, joining his local fencing club in Cardiff as a schoolboy. He represented Wales in the Commonwealth Games of 1966 and again in 1970, the last at which fencing appeared in the programme. One of his greatest successes was at the 1974 Commonwealth Fencing Championships in Ottawa, where he led the Welsh epee team to a silver medal.

He was friendly and encouraging towards everyone. Invariably even tempered, never to be hurried, he was always good company, and worth listening to. Both Bob’s parents were sports enthusiasts. Before he took up fencing at the age of 18, Bob was himself a keen cricketer. He was educated at grammar schools in Cardiff and Wales and at London and Swansea Universities. In 1976 he married Vivien Lysaght, whose career was in the health service and higher education, and whose spirited strong-minded nature complemented his more reticent personality. His own career was as an academic, lecturing in politics and management at the University of Wales; he often took the trouble to bring his students into contact with key political figures. Always a fount of common sense and free of personal bias, he came to devote almost as much time and trouble to sports administration.

He served on numerous bodies, including the Welsh Sports Council and the Welsh Sports Association, as well as being vice-chairman and subsequently chairman of Welsh Fencing 1985-2012, and president of the Commonwealth Veterans Fencing Association 2009-2013. He was also a long-serving governor, latterly a director, of the sports charity SportsAid Cymru Wales. For his services to fencing, Bob received the BFA silver medal in 2006 and in 2011 was awarded a Torch Trophy by Princess Alexandra.

As recently as May 2012, Bob fenced for the veterans’ team in the Welsh epee championships, where they finished second behind a formidable Cardiff A team. “Not a bad result for the old dogs!”, he commented at the time.

Bob will be remembered for his constant enthusiasm, generosity and friendship that encouraged us all to do more. He will be greatly missed.

From The Sword with permission

Bob Turner was a much respected friend and colleague of many in the world of fencing. He was a real gentleman with a great sense of fun, always fair and genuine.

He was one of the stalwarts of British and Welsh Fencing and since he first started fencing as a schoolboy in Cardiff, became not just an excellent and competitive epeeist who represented Wales internationally, but also a skilled and highly respected administrator who held several positions of office over the years. He continued to fence competitively to a high standard until his recent recurrence of illness prohibited him.

In 2006, Bob was presented with the BFA Silver Medal at the BFA AGM in Glasgow for his services to fencing. In 2011 he was the recipient of a Torch Trophy for Services to Fencing, an award with origins from the 1948 London Olympics, presented to individuals who have been identified as making an outstanding contribution as a volunteer in their chosen sport.

At the time of his death Bob was Chairman of Welsh Fencing, Chairman of Whitchurch Fencing Club and since 2009, President of the Commonwealth Veterans’ Fencing Association.

Bob was a source of inspiration and encouragement to so many and will be sorely missed.

Having been introduced to fencing relatively late in life I was always struck by Bob’s great enthusiasm for fencing and life in general. Shown in no small way by his enjoyment of a night of Guinness and greyhound racing, after a days fencing at the Duffy which left us ‘younger’ ones struggling to keep up.

I had the pleasure of meeting him on a number of occasions and never once found him to be anything but jovial even if engaged in a heated debate about fencing.

A fencer with great skill and tactical know how it was a great experience to be a member of his team.

I will always remember Bob, his love of fencing and life, he was a genuinely nice guy who will always be an inspiration to me.

I was very sad to hear about Bob’s passing and shall miss him.

I had known Bob for about 46 years and he was always a pleasure to be with. We had many long tussles on the piste over the years.

Apart from my wife he was the only person to witness my 3 major international veterans wins; World, European and Commonwealth.

Rob Phelps and myself fenced as a Welsh Vets team with Bob in the Welsh Closed team Epee last May, coming 2nd, and Bob fenced well against the youngsters even though it was only a few weeks before his ultimate diagnosis and I believe it must have been his last competition.

Bob bought my dinner in Italy for winning the Europeans and lent me a T-shirt for the medal ceremony and he bought the Cardiff fencing socks with the Welsh colours on when we won the Salle Duffy team Epee, showing his generosity of nature.

My condolences to his family.

A good man who gave generously of his time and knowledge and who will be fondly remembered by many.

When I started Wrexham Fencing Club over twenty years ago, Bob as Chairman of Welsh Fencing, guided us though the red tape, suggesting ideas. In addition, he assisted us regarding funding.

Some years later, Henry asked if we could start up a Welsh Veterans Fencing Association. The nine Veterans in Wales agreed to this, after Peter Stewart organised two Veterans Welsh competitions.

The WVFA now has over 90 members, and Bob had been a committee member ever since its inception. As Veteran fencing grew throughout the world Bob represented Wales in Great Britain, Europe, the Commonwealth, and the World. He was President of the Commonwealth Veterans’ Fencing Association, Chairman of Welsh Fencing and Chairman of Whitchurch Fencing Club.

Bob was a superb epeeist, and other friends who knew him as a young man will tell you of his skill.

We will all miss him so much.

Our deepest condolences to Vivian, Ben and the Family

I was so sorry to learn of Bob’s death. Many were the times when we enjoyed a friendly tipple after those Commonwealth events that would inevitably bring us together in, most often, far-flung lands.

He will be greatly missed by the fencing community to which he dedicated so many years and so much loving effort. His ‘joie de vivre’ was infectious and we could always count on Bob for a bon mot and vivacious discussions.

I particularly enjoyed working with him these last few years at the CFF Veteran events, where his cooperation and assistance were always much appreciated.

Please pass on my heartfelt condolences to his family and all his fencing friends. A great loss for Wales, which he always proudly represented and supported.

I was very sorry to learn of the passing of Bob.

I first met Bob in 1971 at the Quadrangular in Cardiff when I was a young upstart in the England team and Bob was captain of the Welsh. From that first meeting until the last time we spoke I always found Bob to be a gentleman in every sense.

Although I don’t recall ever crossing swords with Bob I watched him fencing on many, many occasions over the years. Bob was always modest in victory and generous in defeat. He was a fine example of how sport should be played and the epitome of everything that is good about fencing.

Bob was not only a great ambassador for Welsh Fencing but also for British Fencing and our sport is all the poorer for his passing.

I was very sad to learn of Bob’s death – he was a good friend and epeeist. You could always be sure of a hard fight with victories either way and a smile and courteous word afterwards.

I have fond memories of our time in 1995 in Florida at the Duel on the Beach. The Italians were giving the referee a hard time and arguing with every hit in their usual manner but he took it in good stead.

We had an enjoyable visit on foot to the Salvador Dali museum whilst at St Pete’s and I remember Bob pouring with sweat whilst we were walking around in the humid November weather.

I joined him in Dublin on several occasions as an Anglo Welsh Vets team in the Duffy along with Mike Lee and Mick Meyer where we enjoyed a meal and a chat afterwards.

He will be fondly remembered by all who came into contact with him I am sure.

However I will always remember Bob with a smile on my face. I had the pleasure of facing him a number of times on the piste during my ill advised forays into Epee. With good humour he would pick me off with surprisingly light touches for such a big man.

I remember on one occasion I decided the only chance I had of landing a hit was to use my relative youth and speed to fleche. I hit him full in the chest and discovered exactly how a crash test dummy feels when colliding with a brick wall. His reaction was a wry smile and genuine concern that I had not damaged my wrist too much.

He was a true gentleman and it is a great pleasure to have known him.

When I was Chairman of the Welsh Sports Association he was my Vice- Chairman. He was hugely supportive and gave advice thoughtfully and generously. When he thought I was about to make a wrong decision he would tell me in the nicest possible way and he was usually right!!! He took over from me as Chairman.

He was a true gentleman and friend.

Our heartfelt sympathies to family and friends of Bob on behalf of Canadian Veteran Fencers.

So sad to learn of the passing of Bob Turner. We first met at the European Veterans Fencing Championships in Luxembourg in the 1990s and went on to travel to Florida, South Africa, Ireland, Moscow, Mexico and Melbourne.

It was always a pleasure to chat with him and face him on the piste. I know that he particularly enjoyed our visit to Mexico in 2006 which took in Acapulco and Mexico City. It was tough! We often chuckled about our earlier climb up Table Mountain during the Cape Town World Championships when thirst almost got the better of us. Stupidly we forget to to pack sufficient water and our vision of a few beers at the top proved well wide of the mark!

Veterans fencing and fencing generally has lost a real gentleman.

I would like to say what a sad loss of a friend a gentleman. We had great fun when fencing especially with Joe garret in Cape Town.

I will miss him

I am unable to come to Bob’s Memorial Service, but I would like to put on record my deep appreciation for all that he did, not only for Welsh Fencing, but for fencing and the wider sporting world as well. I know he was involved with the SRA (then CCPR), and was much respected for his input.

Please pass my condolences to Bob’s family, and tell them I shall not forget all that he meant to our fencing world.