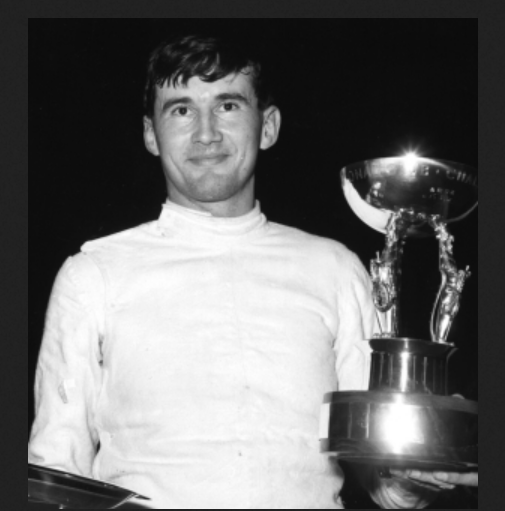 Bill Hoskyns, one of the ‘greats’ of the sport, died on Sunday 4th August. Bill started fencing at Eton and continued at Oxford University. He burst on to the international scene at the 1955 world championships, where he played a major part in Britain’s foil team bronze medal, beating all four members of the French team. As a foilist, he won Bologna (1959), was runner-up in the Duval and in Ghent (1960), came third in the Paris Martini (1959) and in Warsaw (1960), won the Paris Martini in 1963 and came 7th at the Tokyo Olympics in 1964.

But it was at epee that he had the greatest success. At the 1958 world championships in Philadelphia he reached the epee final after a quadruple barrage and then faced two Russians and five Italians, among them former Olympic and double world champion Eduardo Mangiarotti. Bill fenced brilliantly to take the title. He is, to date, only one of two British Fencers to have been senior World Champion.

Bill fenced at the Olympics Games six times from 1956 to 1976 – a record for a British fencer. He won team silver in Rome (1960) and individual silver in Tokyo (1964). He also fenced in seven world championships from 1955 to 1967, winning individual gold and silver medals and team silver at epee and a team bronze at foil during 13 successive appearances in the British team.

He was the most successful Commonwealth Games fencer, winning three individual gold medals at epee and one at sabre, as well as a silver at foil. He also won more medals (21) at the British championships than anyone else. Epee champion four times (also runner-up four times and third twice), he won the foil title three times (also runner-up three times and third twice) and the sabre title once (also runner-up and third once) to become only the second man (after Edgar Seligman) to win all three championships. This is an achievement unlikely to be equalled.

He finished his international career by winning the Duren epee tournament in 1973 and 1974 and coming second in Oslo in 1978 at the age of 47. Twenty-two years later, he won a bronze medal at the Millennium veterans’ world championships.

Bill often flew to European events in his single-engine plane. In 1956 he, Allan Jay and Gillian Sheen created a sensation by becoming the first civilians to fly into Budapest since the war and across the Iron Curtain. Years later, Allan pointed out to Bill that, had the engine failed, Britain would have had no senior world or Olympic champions.

Although not quick on his feet, Bill Hoskyns had extraordinary timing and could put his opponents under continuous pressure so as to induce them to attack at the moment of his choosing, when he displayed an uncanny ability to pick up his opponent’s blade at the very last moment. His nonchalantly elegant style gave him a gentleman-amateur image that was much admired. Watching him in action, one American opponent said simply, “Suave – so suave, it’s painful.”

Bill was appointed MBE and a Vice-President of British Fencing and was recently elected to the FIE Centennial Hall of Fame. He was a very popular figure in international fencing and his generation of fencers still asked after him at major FIE events.

Bill is survived by Georgina, whom he married in 1960, and his five children: Karina, Jonathan, Celia, Sophie and Dominic and ten grandchildren. He put the same passion into his family as his fencing and was a devoted husband, father and grandfather, encouraging all his children to fence, and had recently been taking one of his grandsons to learn fencing too.

We would like to extend our heartfelt condolences to Georgina and all his family.

Obituary published in the Telegraph

Obituary published in the Guardian

How many pages do you want about Bill? He was 6 years older than me so we did not meet at school but I first met him in 1957/8 when I left the Army. He took me under his wing and, together with Alan Jay, we were dragged into the International scene when, with them to lead us, Britain was expected to win. I beat him once in 1958, when he was world champion, but it was difficult to beat them both on the same day, so second or third was considered a great result!

I went abroad with him many times, sometimes in his private aeroplane. My first big outing in Paris in 1958 I drew Huet ,a former French star but very much a veteran then. I beat him 10-0 in the last 16.  Bill took me aside and told me “You don’t do that . You give him a hit or two”. Then I got in the team with matches against Italy and Switzerland leading on to the 1959 World Championships in Budapest (Alan Jay’s two medals). In those days most competitions meant going abroad, the only home one of note was Leamington Spa (now Birmingham). Bill had quite a wicked streak in him and after an “incident” in a rather smart hotel, we were banned from using it again. Bill was the ring-leader as he was in Huy in Belgium when we had an international race late at night round the town, principally through the sewer pipes which were being renewed.

I was in hospital a lot of 1960 but out in time for his wedding. I returned to fencing and in 1962 (?) Bill and I both got to the last 8 of the Martini, the premier competition of its day, a Grade A now. I think we were the first Brits to get that far but Bill seconded me although I went out to a Hungarian. He went on and was the first British winner.

All his achievements are well recorded. But he came back as a Veteran for a few years. There was a competition at Epsom and a Vets team was entered, Bill, me and Lawrence Burr. The opposing teams looked on the old crocks as easy meat until the matches started. We won every one 8-1, each of us losing one fight. Age shall not wither them (as Edmund Gray’s grandfather wrote). Then he qualified for the Vets World Championships in Hungary and I became his second, willing him on to win a world gold again. He got a bronze,

Flying with him was quite exciting. Flying to Evreux where there was a grass strip and a man to clear the sheep off it first. Bill had all the required navigational equipment but seemed happier guessing where he was. We flew to Le Bourget Paris (pre Orly) and he asked us to look out for it, pointing vaguely to the far left. I happened to look down and saw we were right on top of it. Bill did a quick circle which got us to the front of the queue and on landing we were told to taxi on the grass to the side and over us they landed the testing flight of the first 707. You may remember that on its return to the USA two days later, its engine pod fell off near Rouen.

I could go on for ever if you want any more. No fencer ever had better timing and distance. He was infuriating to fight and was very economical in his movements. However when he moved he hit you.

He was a great man.

While preparing myself for the Olympic Games in Montreal we had access to lots of film footage of various World Championships and Olympic Games.

I noticed one film of the fight between Jean Cloude Magnan and William Hoskyns from the World Championships in Gdansk 1963. Magnan was throwing a cascade of desparate attacks on Bill who was defending himself with great skill, mixing attacks on preparation with very late parries and stop hits. Eventually Bill lost 10-7 to the World Champion.

My first sight of Bill was during the Olympic Games in Montreal in 1976.

I was introduced to Bill in 1979 when he was visiting London and purchasing some equipment in the Leon Paul shop at New North Street while I was giving fencing lessons on the top floor.

It was a huge privilege to shake hands with such a legendary fencer who at the same time was so surprisingly natural and kind.

My next encounter with Bill involved travelling with him to Clermont-Ferrand in 1981 for the World Championships in his white Peugeot 405 when he was Captain of the GB team.

The results were very encouraging as all men’s foilists went through the first two rounds. Bill was very kind and understanding; quietly spoken yet hugely charismatic, providing inspiring leadership from the front as our Captain. But when the fencing was over he also knew how to have a good time and our trip back was most enjoyable with a particularly memorable dinner I recall in the Latin Quarter of Paris when I felt I had to pinch myself to believe that I – a young fencer from Warsaw – was reviewing fencers’ performances with such an eminent and great man.

I recall being amazed seeing Bill in some British competitions reading a book between fights and being incredibly calm.

Bill was famous for his very late parries when his attacker did not have any chance and he had a superb one-two (which I believe only Richard Kruse has been able to come close to reproducing since in GB).

William Hoskyns was a phenomenal fencer, a great ambassador for British Fencing, famous not only for his outstanding results but also for travelling to competitions in his own aircraft! He was unbelievably cool, totally approachable, charming, kind, brilliantly talented and had immense integrity. To the rest of the world he was the epitome of understated British sophistication and class. He was a great Captain for our team and a true gentlemen who will be hugely missed and I am so proud to have known him.